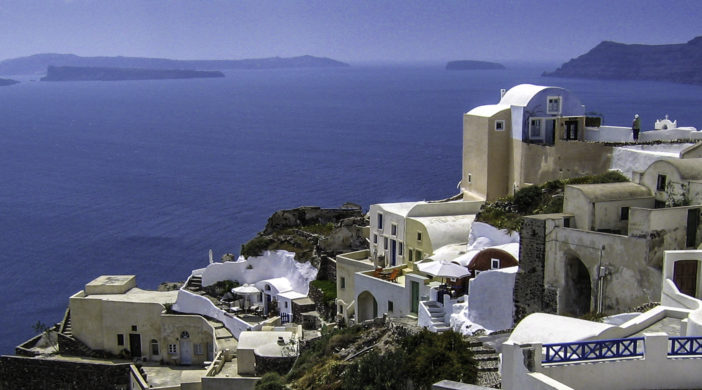 A memorable few years ago my wife and I visited the Greek islands of Santorini and Paros. There we encountered some unique and equally memorable ancient varieties of Greek wines. At a recent wine tasting we found Greek wines being offered from Sonoma.

Santorini: Nyteri (night wine), is a dry white wine found on Santorini composed mostly of Assyrtiko with some possible Athiri and/or Aidani varieties added for sweetness (Wikipedia Santorini wine ).  Dating from the Middle Ages, the wine was traditionally made in the cool of night to avoid oxidation. It became famous when distributed by galleys of the Republic of Venice in the 13th century. At that time the island was known as Thira and was part of the Venetian state of Naxos. We fell in love with Santorini and with the unique character of the dry white local Assyrtiko wines made in the Venetian tradition. On returning to San Francisco we couldn’t find the Santorini wines – until now.

Georgos Nu Greek wine is importing raw wines from family vineyards on Santorini and the Greek Peloponnesian peninsula. Bottling is completed in Sonoma at Deerfield Ranch Winery near Kenwood under the supervision of Robert Rex and Georgós Zanganas, founder of Georgós Nu Greek Wines. Labeled “Santorini”, with your eyes shut you would think you were sipping it at sunset in a café in Oia on the caldera of Santorini – autentico.

Why does Santorini wine have a unique character? The answer is probably three fold: 1) small centuries-old grape vines (no phylloxera); 2) mineral rich volcanic soil resulting from a huge 16th century eruption; and 3) traditional Greek dry-farming techniques. Assyrtiko grape is a high acid grape full of citrus, bone fruit and mineral nuances. Often referred to as a “white grape in red’s clothing”, it produces full bodied wines with an average of 13.5% abv. The wines are organic, non-GMO and sulfite free, a real plus to those of us wine lovers with sulfite allergies. The tradition in Greece is to drink the wines young, preserving the full-bodied natural flavors of the grape. On aging the wines reportedly often take on qualities reminiscent of an Alsatian Riesling. For me, the young wine has a unique Greek character. Unfortunately, with the advance of tourism only limited land on Santorini is still devoted to producing traditional wines.

Dry farming: While on Santorini we were puzzled by large numbers of woven baskets apparently left as litter in farm fields. We now realize that the “baskets” are actually dry-farmed grape vines. This technique involves pruning vines low to the ground and weaving them into the form of baskets. Grapes held inside the basket are protected from the winds and heat. Nighttime condensation in the vine basket drip-waters the roots. Since Santorini imports nearly all of its potable water by tanker from the mainland, the dry-farming technique allows vines to grow without the necessity of constant watering.

Paros: After a day road trip around the coast of Paros, our wanderings found us at sunset in the beautiful fishing village of Naoussa on Plastira Bay. During a sunset walk around the fishing boats on the quay we encountered wonderful aromas emanating from a small cafe packed with locals. From a table in the back of the café the only English we heard was from the lips of our waiter, but all the smiles we met were warm and welcoming. Our waiter insisted we try some authentic Mandilaria (Amorghiano) red wine. When we deferred, he brought it to us on the house. As an aperitif before our wondrous dinner of fresh fish (landed-that-afternoon), it was perfect. The grape vines are grown in sandy island soil using a low pruning technique called “aplotaria.” Dry farming techniques yield sturdy ancient vines with very deep roots. I am not a big fan of light red wines but, because of the aroma, acidity, soft tannins and unusual ripe berry character of this light red wine, I found it very pleasing. Like Santorini, the custom is to savor these wines without aging. When I looked for something similar on our return to San Francisco – again, I came up empty handed, until now.

Peloponnese Light Dry Red Wine: Georgós Nu Wine is importing a red wine from family vineyards in the Peloponnese Nemea region that reminds me of our memorable dinner at Naoussa on Paros. Labeled “IOS”, while not made from Mandilaria grapes, the Nemea vineyards old Agiorgitiko vines yield a tangy dry light red aromatic wine with relatively high acidity, soft tannins and a uniquely Greek character. As on Paros, this light dry Greek wine is uniquely suited to seafood.

Dry Red Wine Blends: Depending on the viniculture and unique local soil conditions, the Nemea vineyards also produce fresh red wines with smooth texture, rich cherry flavors, full body and strong tannins. These cabernet-like wines are being imported by Georgós and are mixed with local Sonoma wines to yield interesting blends with distinctive flavors. One wine labeled “Corfu” is a blend of 15% Nemea wine with 85% Sonoma cabernet, merlot, cab franc and Malbec. The resultant blend reminds me of some good earthy Mavrodaphne wines we savored in Athens before our reluctant return to San Francisco.

Maybe this year would be a good year to revisit Greece, at least in culinary spirit, thanks to Georgós. Georgós Nu Greek Wines are distributed through Whole Foods and online. See also: A mythological wine tasting with Georgós Nu Wines and An Island in Time: Santorini, Greece.