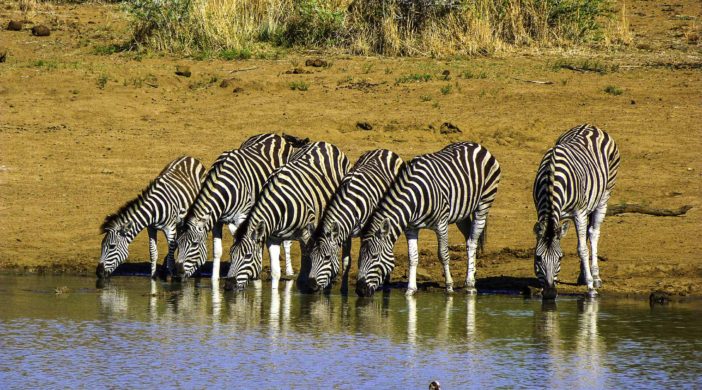 Just one day left in the country – as usual. Going to the Kruger National Park, the ultimate place for a safari in South Africa, was out of the question given its remoteness. I feared I had to get ready for a small reserve, fenced like a zoo, if I wanted to see animals. Only after more research did I find the Pilanesberg National Park. This little brother to Kruger lies within a day-trip distance from Pretoria where I was staying. Unlike other small reserves, Pilanesberg is a vast natural park. One concern remained: if Pilanesberg did not have the fame of Kruger, how many animals could I actually see?

Animals do not sleep in

I met Francois at my hotel lobby in the morning. He led me to his oversized SUV, and I asked yawningly: “Where are the rest of the tourists?” He replied that I happened to be the only one who signed up for the tour that day. A private safari in South Africa, at the lower cost of a group rate—that woke me up, and we got on our way.

We had to set off at four o’clock that morning to arrive at the Pilanesberg National Park shortly after sunrise. As any safari-experienced traveler knows, and I did not, animals leave their hideouts only early in the morning and late in the afternoon. They spend the mid-day hours in natural sanctuaries to escape the merciless African sun.

The drive to Pilanesberg took just over two hours. We entered the park through the Bakubung Gate, (referring to the name of a local tribe). Francois had to abruptly stop to avoid a turtle trying to cross the road. Great—if nothing else, I have seen at least one animal.

As we were driving deeper into the park, a second animal appeared behind the tree, creating the true safari mood. A giraffe was enjoying her breakfast. The sight of her at a tall bush, where she did not have to bend her neck too much, neatly illustrated the genius of nature. In addition, the tongue of a giraffe is typically about 18 inches (45 cm) long and equipped with special hard growths to allow them to comfortably scrape leaves from thorny branches.

The Holy Grail of safari

The one big animal we kept encountering throughout the day was the rhino. First, two rhinos passed us by, both walking along the shoulder of the road. Another time, an especially large rhino slept peacefully in the shade of a tree. Given how easily we could approach them in the car, it is small wonder that they have become the prey of poachers, who can cash in $400,000 for a rhino horn in Shanghai or Saigon.

Finding rhinos without cars would be another story. In fact, they belong to the famous group of five animals that were considered the most difficult to hunt on foot. Dubbed “The Big Five” in the late 1800’s, the group includes lions, elephants, buffaloes, leopards, and rhinos. While I was trying to resist the societal pressure that on safari you just have to see “The Big Five”, my mind automatically checked off rhino on the list. Four more to go.

Overall, we met few other visitors in Pilanesberg National Park—but it was a Monday in November, at the end of South African spring, so not a busy day. Whenever we encountered another group, Francois stopped not only to to greet them, but also to exchange tips about interesting sightings nearby. That way, we learned about our best trophy of the day. Driving around a rocky cliff, on top we spotted beige, hairy skins shining through the branches. Yes, a band of lions, and only about 50 feet (15 m) from the car. We could clearly see just one member of the group: a lioness. She paid the cost of my trip by glancing into the camera for a split of a second.

Francois said that we were very lucky to see them because lions usually spend  20 hours a day sleeping. When they are briefly awake, they devote most of their energy to only two activities: hunting and procreation. Satisfied, that was now two of the Big Five.

We drove down to the valley, at the center of the park, which was the crater of an extinct volcano. While the surrounding hills were covered by forests, the valley resembled savannah, with patches of grasses and bushes. Pilanesberg did indeed seem like a wilderness. It would have been easy to imagine that the animals had lived there since the beginning of time.

The history of the Pilanesberg National Park, (also called the Pilanesberg Game Reserve), is not straightforward. Toward the end of the 19th century, a big part of the current park served as farmland for Boer settlers, along with all their infrastructure. In the 1960’s, the Apartheid government bought the land and created a bantustan, or “designated black homeland”. The bantustan’s leader decided to use the area to promote tourism and turned it into a natural preserve. At that time, one of the biggest transfers of wild animals in South Africa was initiated, called “Operation Genesis”.  That effort brought all the present species into the former farmland area. The preserve was named for Pilane, the ancient great chief of the Tsawana tribe.  Only in 1979 did Pilanesberg become a National Park and open to the public. Prior to opening, all the necessary amenities were constructed: roads, lodges, and visitor centers. Over seven thousand animals reside there today.

In the valley, we stopped at the Mankwe Dam, which was created during farming years of Pilanesberg, but now serves to water the wildlife. Francois parked in a fenced hide. He opened the car door and carefully scanned the surroundings to see if we were alone. While common sense says that no one should get out of the car casually on safari, the internet is full of stories about people who lacked that common sense. The hide was fenced on all sides and also on top – to protect visitors from baboons. Baboons may look like cuddly playful animals, but their skillful hands can be dangerous, as many posters in South Africa warn.

We walked into a small wooden observatory in the hide, and Francois pulled out two sets of binoculars for us to scan the waters around the dam. Several birds in the distance but gigantic footprints in the mud right below the hide: a hippo family was wallowing in the water.

As we continued driving, I excitedly pointed to a lone zebra. Francois said I should wait because there would be more to come. He was right. In a moment, we arrived close to a herd of animals with many zebras, kudus and other species. All of them mingled together, in no apparent fear of each other, us or their surroundings. I asked Francois how that was possible, and he explained to me: these animals are prey. Each species has some unique abilities to spot predators. Therefore when multiple species share a pasture, their collective pool of skills is greatly expanded. Thus they become safer than if they roamed in separated species herds. Some of the animals we met have not made it into safari-social imagination because they are “not-cute”. In that category, there are many wildebeests in the park. Also, I could not guess the name of a small pig, without fat, but with tusks. Francois told me those were warthogs.

For the rest of the morning, we drove to several other hides in the park. From one, we could see a small natural pool that served as an animal water fountain. I began to appreciate how much structure there was to life in the park—a herd of zebras came over, orderly lined up along the pool, and as one, lowered their heads to start drinking.

One can learn more about the park in a visitor center in the middle of the park. The center looked slightly out of place, with its ornate stucco and pilasters on the façade – until I noticed the year on that portal: 1936. The building serves as a reminder of the Boer farm in Pilanesberg’s past.

On the last leg of our drive through the park we noticed an elephant family approaching the road— including several kids. They moved slowly, stopping and pulling branches with their trunks to satisfy their vegetarian appetite. The bush they were chewing seemed to me to be completely dry, possibly from some earlier fire. Showing what a multi-purpose organ the trunk is, one of the elephants used the limb to gently get a grain of dirt out of its eye. As the family crossed the road right in front of us, we warily kept our distance. Francois explained how the elephants could become dangerous if they felt uncomfortable. In that case, they would have sent a signal of their displeasure by frantically waving their gigantic ears back and forth. Nothing of the sort happened and they kept on walking down the slope, probably to a creek to refresh themselves. That was number three checked off my Big Five list.

Nnoon was quickly approaching, and Francois took me to a lodge at the Bakubung Gate for lunch before heading back to Pretoria. The lodge was pleasant and fit neatly into the surrounding landscape. Seated on a patio with great views, a nearby sign warned patrons to stay away from the fence. It seems the lodge fits so well into the landscape that elephants like to come visiting.

Enough for the day?

Over a beef sandwich, I was recounting the animals we had seen. Pilanesberg allowed me to see many indigenous animals, as well as three of the Big Five. “Is that typical?” I asked. Francois told me to feel lucky—of the two remaining ones on the Big Five list, buffaloes do live in this part of South Africa but venture into Pilanesberg only rarely. Some leopards, on the other hand, roam Pilanesberg but they are the trickiest ones to spot. Unlike lions, they operate as loners and spend their days sitting on tree branches where they are well camouflaged and hard to spot. A trip to the Kruger National Park would have surely yielded more sighting trophies, perhaps even checking off all five on the list. But as my first safari in South Africa, particularly when I had just a single day, Pilanesberg did more than just well.

As we were leaving the lodge, I noticed a poster which on closer inspection contained a long list poisonous snakes of South Africa. In that regard, it is perhaps good that I didn’t see all that Pilanesberg has to offer.

1.) Pilanesberg National Park (also called the Pilanesberg Game Reserve) lies about 100 miles (160 km) from Pretoria, in the North West province of South Africa. The drive from either Johannesburg or Pretoria takes about 2-3 hours.

2.) Knowing your location in South Africa is important because any traveler should check health precautions—for example, some provinces of South Africa have a malaria travel advisory. North West is not one of them. But you should consult the relevant websites.

3.) I went on the Pilanesberg safari trip with travel agency Mmilo Tours. They operate the tours from Johannesburg and Pretoria. The agency provides a car and a driver-guide, who will pick you up at your hotel. For a day trip safari, the pickup time is four o’clock in the morning and the return time around three o’clock in the afternoon. You do not need to bring any special items with you. A head cover and a plenty of water will do.

For other articles on Africa-Travel see this link.