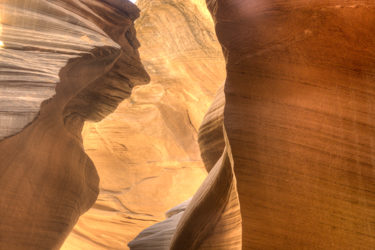 Arizona’s slot canyons have long held a fascination for me. Especially notable for their beauty are the Antelope Canyons, both Upper and lower, located near Page, Arizona on the land of the Navajo Nation.

Formed over millennia by flash floods that eroded the Navajo Sandstone, the canyons are easily accessible

and considered the most visited and photographed of the Southwest’s slot canyons. Antelope Canyon is actually two separate canyons, Upper Antelope called “The Crack: and Lower Antelope, known as “The Corkscrew.”

When I learned that noted Santa Fe photographer, Craig Varjabedian, was taking a small group of adventurers on a week-long photo trek that included three days exploring the canyons, I immediately reserved a space on the tour.

Our group of eight, including Craig, met in Albuquerque and spent most of the first day traveling via van transport to Northern Arizona. This gave the group a good chance to get acquainted and exchange photo tips.

That evening at our lodging in Page, Craig went over the itinerary he had planned to maximize our opportunities to experience the canyon in its best light and to return home with memorable photos. Graciously, he offered to share his own personal equipment with any of us who might need extra gear.

Having photographed extensively in both Upper and Lower Antelope Canyons, Craig felt we should concentrate our time in Lower Antelope, where lighting is better in the early hours and late afternoon. We would also avoid the crowds traipsing through Upper Antelope. In addition to a modest admission fee to the site, each of us purchased a photography permit which allows five hours in the canyon.

Everyone in the group carried tripods and SLR cameras with several interchangeable lenses. One of Craig’s most valuable tips was his advice to use just one lens each day for shooting. “You don’t want to remove a lens and risk capturing a lot of sandstone dust on to your sensor,” he told us. “That could ruin your trip.”

On Day One, I used my widest angle lens with a zoom range of 10-22 mm on my Canon 40D digital camera. The lens range is equivalent to about a 16 to 35.2 mm range on a full-frame sensor. The following day I tried out a Tamron 28-75 lens and although it performed admirably, I returned to the wide angle for the third day. This worked out well in that, limited to one lens, I found myself moving up and down the canyon passages to get the best angles.

Craig spent time with each member of the group. Because of the wide range of light, we worked a lot of images in HDR, (high dynamic range.) This is a process of taking several images of the same scene at different exposures to capture both the highlights and the shadows and then merging the images together into one final image. HDR helps to create an image that is more similar to what the natural eye sees without blown out highlights and with good definition in the shadows.