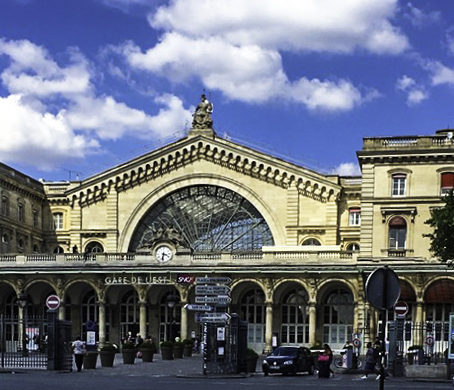 I’m often miffed that tourists prefer air to train travel once inside Europe, especially in Paris with its beautiful Parisian train stations. Typically, airports are a goodly distance from city centers, expensive by taxi, and oh la la, those airport lines. My preference whenever possible is train travel, not simply for the high-speed trains, which don’t exist in the United States, but also for the history and intrigue of the actual stations . Since I park myself in Paris every summer, I’ve discovered Parisian train stations offer convenience, economy and art and have come to appreciate some of the most intriguing train stations in the City of Lights.

On the Left Bank straddling the 14/15 arrondissements (neighborhoods) towers Gare Montparnasse. Constructed in 1840, it was completely rebuilt in 1969; thus the more modern façade, looking less like a train station and more like a high-rise building.  Atop the railroad tracks sits the Jardin Atlantique, a 3.4 hectares park of 500 trees, walkways and public space use. The TGV trains from Montparnasse service the west and southwest of France. Think Rennes, Bordeaux, Nantes, Poitou-Charentes, La Rochelle,  Saint-Malo, Brittany, and the north-west of Spain.

In the southeastern corner of Paris, in the 13eme arrondissement on the left bank overlooking the Seine is Gare d’ Austerlitz. I think of this station as quieter, less hectic than its counterparts. Gare d’Austerlitz was named after the famous Napoleonic battle fought in a region of what today is the Czech Republic.  It is set back a bit from the main street and services southwest France and shorter routes toward Orleans and Toulouse. Gare d’Austerlitz is a  five- minute walk from beautiful Jardin des Plantes;  and for those traveling to Barcelona and Madrid, Spain, the Talgo Train departs and arrives here.

From Gare d’Austerlitz, stroll across the Seine and you’ll find yourself on the Right Bank in the 12th arrondissement where the first thing you will notice is a stately clock tower; you have arrived at Gare de Lyon, one of the busiest stations in the eastern end of Paris. Built in 1900 for the World Exposition, Gare de Lyon is the third busiest train station in France. Alas, the divinely ornate Le Train Bleu restaurant reigns atop the staircase overlooking the bustling station. Trains depart for the south and French speaking part of Switzerland here. Think Avignon, Lyon, Marseille and Geneva.

However, if you are traveling north to Lille, Calais, Belgium, Germany or the UK, best to scramble over to the 10th arrondissement to the princely Gare du Nord station. The Eurostar for London also departs here. Look up when entering the Gare du Nord for a view of architecture redolent of a bygone era. Behold the carefully sculpted statues along the cornice, which represent destinations beyond France as well as famous sculptors. The other fourteen petite statues represent cities in France.

In the same arrondissement, facing Boulevard de Strasbourg in the 10th, reigns the Belle Epoque station, Gare de l’Est.  Boasting newly designed modern halls, marrying domes and architectural tradition, the station is infused with light. One of the oldest railways stations in Paris, it serves the Eastern corridor as well as Luxembourg, Germany and Switzerland. In 1833, Gare de l’Est saw the first departure of the Orient Express for Istanbul. Think Strasburg, Metz, Warsaw, Berlin and Moscow.

Alas, Gare Saint-Lazare, stationed on rue d’Amersterdam in the 8th arrondissement, is the second busiest station after Gare du Nord; it is also the station that attracted the Impressionist painters. Many lived nearby and created numerous paintings of the Saint-Lazare. Edouard Manet painted “Le Chemin de Fer” in 1874, Gustave Caillebotte painted “Le Pont de l”Europe “ in 1876, and Claude Monet painted the railway station for an 1887 exhibition. More recently this stunning station has made its way into films. Many intercity or short distance trains depart here, as do trains towards Normandy and the western suburbs of Paris.

The bonus in all Parisian train stations is their restaurants, coffee bars, news kiosks, and information counters with bilingual agents.  So – Bon voyage!  For your train travel as well as rail passes, contact: www.RailEurope.com

For more on European train travel, read this related posts: “The Best Way to Travel Through Switzerland ” and “Why I Love European Train Travel.”