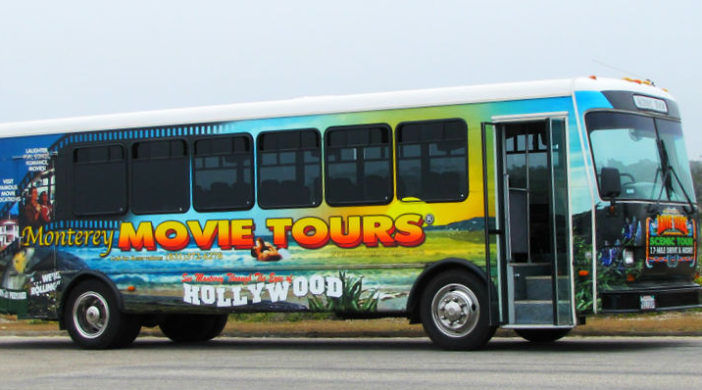 Location. Location. Location. The real estate promoter’s mantra applies equally to the magicians of the silver screen. Many Hollywood faces long faded from public consciousness appeared in dramas that continue to resonate today because of their memorable scenic settings. Monterey County has been a favorite of movie directors for the variety and accessibility of its scenery since Edison’s cameraman shot Surf at Monterey in 1897. Pounding surf, brooding forest, rugged wilderness, and verdant valleys have featured in hundreds of movies and countless TV shows and commercials. It has also doubled for the coasts of New England, old England, France, Norway, Russia and beyond. Being a dedicated film buff, I made for the best seats in the house for a matinee showing of Monterey Peninsula, a movie star for the ages. 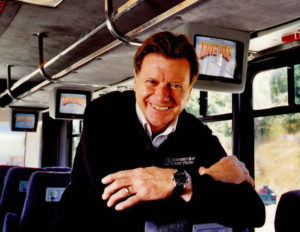 Film buff owner of Monterey Movie Tours, Doug Lumsen, has distilled the best of the best (and the worst) into a rolling presentation in a luxury theater on wheels. His multi-media-equipped tour bus offers regularly scheduled showings beginning in downtown Monterey. The three-hour trip explores scenes on land and sea, along Cannery Row, through Pacific Grove, Pebble Beach’s 17-Mile Drive, and Carmel-by-the-Sea; all have starred in memorable movies as well as others that, in Doug’s words, “only have themselves to blame for their obscurity.”

We slid into comfortable, high-backed seats, each named for a Hollywood personality. Paired with Sharon Stone, the scary femme fatale of Basic Instinct, my choice of Michael Douglas did arouse some trepidation. In the seat pocket, a copy of the “Monterey County Movie Map” published by the Film Commission listed “200 and counting” titles of big screen movies with scenes filmed in the area. We would see clips from many of them today. 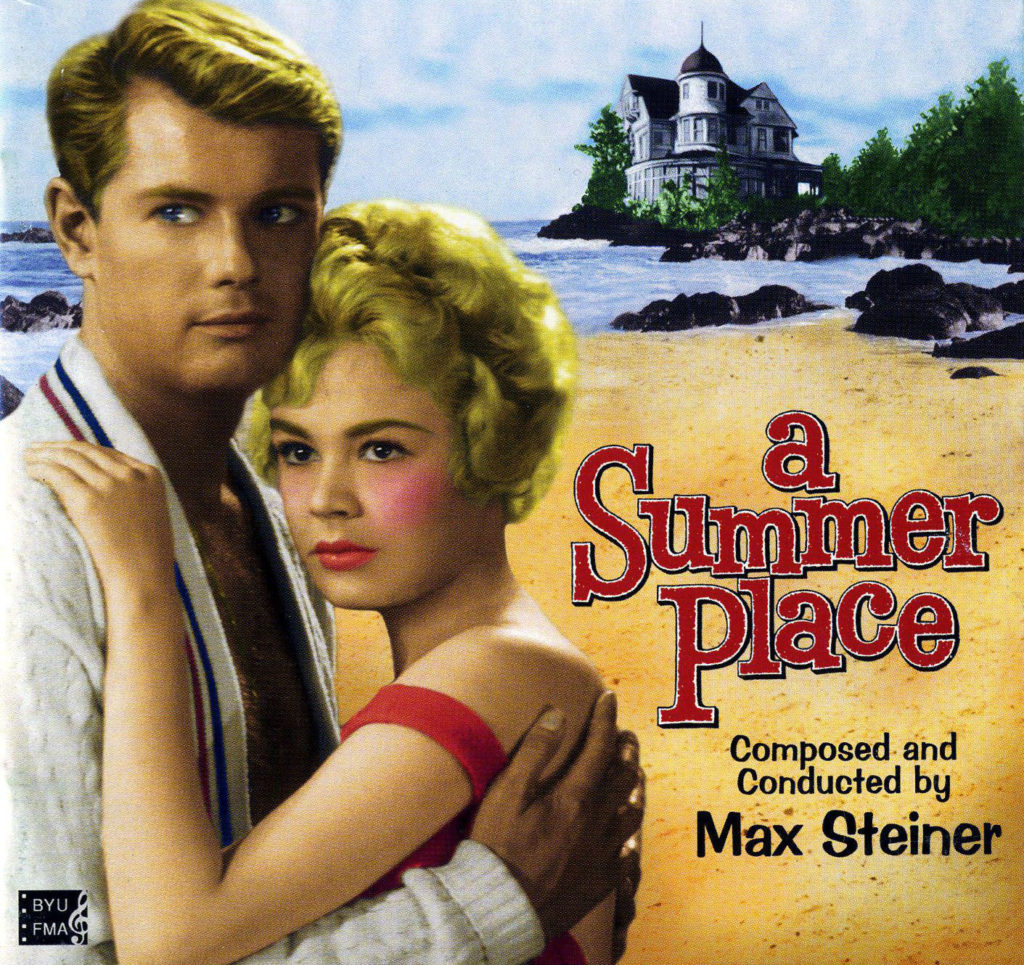 As the bus cruised through Monterey’s Old Town Historic District, I adjusted my headset to catch the familiar (to anyone who was a teenager in the 1960s) sighing strings of the theme song from A Summer Place. At that moment landmark Colton Hall appeared in the window; Troy Donahue met Sandra Dee in front of the same building on the overhead monitor.

Doug slowed the bus to a crawl through a dystopian landscape of broken concrete and twisted rebar. This former cannery site filled the haunting opening credits of Nick Nolte’s 1982 interpretation of Doc in John Steinbeck’s Cannery Row. Back tracking 30 years to 1952, Marilyn Monroe emerged from the original building in her first starring role. Directed by Fritz Lang, Clash by Night, portrayed the gritty side of the working cannery district before its transition to a tourist mecca.

Several remaining buildings that Steinbeck might recognize, the models for Doc’s Lab, Lee Chong’s grocery and La Ida Café, cluster at the west end of the Row against the Monterey Bay Aquarium. For years after it was released, fans continued to ask docents for directions to the fictitious humpback whale exhibit visited by Spock and Captain Kirk in Star Trek IV: The Voyage Home (1986).

Our traveling theater rolled along Ocean View Boulevard into Pacific Grove. At Lovers Point, Doug pointed out the lawn where a coffee shop film set was built for Nicole Kidman, Meryl Streep, and Reese Witherspoon to meet in Big Little Lies.

On Lighthouse Avenue, Tom Hanks patrolled with his drooling canine companion in Turner & Hooch in 1989.  Further up the hill, the La Porte gingerbread Victorian mansion retains a gazebo built for its movie role as the Pine Island Inn of A Summer Place (1959),

Shortly after passing through the gate into Pebble Beach, Marlon Brando and Karl Malden stormed the links of Monterey Country Club in One Eyed Jacks (1961). Near Cypress Point, Doug skillfully maneuvered his bus through the curves of Seventeen Mile Drive to avoid Doris Day’s frightening on-screen careen towards the ocean – Julie (1956).

The high stance of our bus seats allowed views over walls and hedges into some of the most storied Pebble Beach luxury compounds. The distinctive Byzantine archways of the Crocker-Irwin mansion were featured in My Favorite Brunette (1947) with Bob Hope and Dorothy Lamour and Escape to Witch Mountain (1975), where Eddie Albert rescues two alien children from the master of the “castle.”

A short break at the newly opened Pebble Beach Visitor Center included views of a newly created wide-screen presentation of the resort as well as golf cart photo ops and souvenir logo gear. 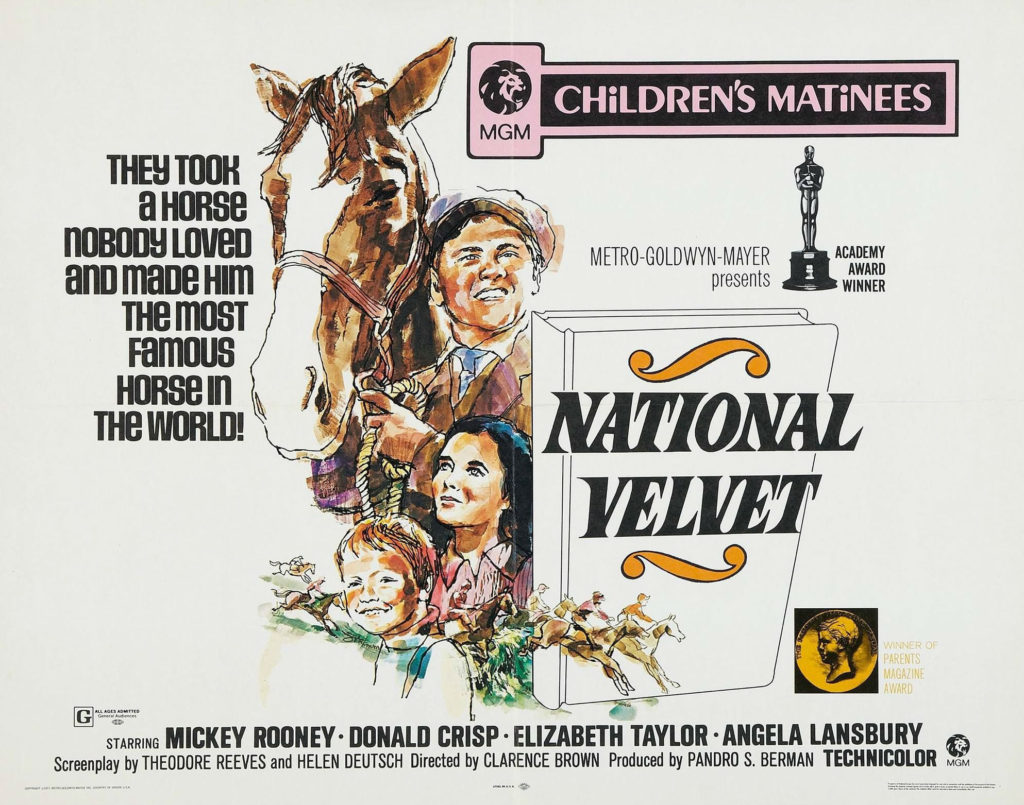 On passing the 10th green, we watched Elizabeth Taylor’s National Velvet (1944) ride to fame and fortune across the hallowed turf that stood in for the coast of southern England. In the distance across the bay, Point Lobos State Reserve served as the Cornish coast in Alfred Hitchcock’s Rebecca (1940) as well as the scenic backdrop in nearly 40 other productions.

Often compared to Disneyland for its quaint buildings and burgeoning crowds, the main street of Carmel-by-the-Sea, has starred in numerous features. Tour buses are not permitted on Ocean Avenue but we did glimpse a couple of scenes from former mayor Clint Eastwood’s Play Misty for Me via our route to the historic setting of Mission Carmel.

During our return drive to Monterey, Doug, showed clips of movies filmed at other locations in the county. Scenes from the dramatic coastline of Big Sur (Basic Instinct, The Sandpiper, Junior) to the agricultural communities of the Salinas Valley (Bandits, East of Eden, The Cat from Outer Space) showed why filmmakers from Cecil B. De Mille to Alfred Hitchcock have flocked to the region for more than a century.    IF YOU GO: Follow the Monterey Movie Tours website link inserted here for more information (https://montereymovietours.com/ ).

2 thoughts on “Monterey Peninsula: A Movie Star for the Ages”