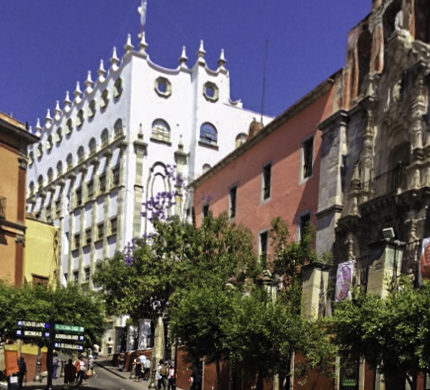 To arrive at night in  colonial Guanajuato, Mexico  is to be swept up in the lively energy that pulsates through this vibrant colonial city. A UNESCO World Heritage Site, Guanajuato is located in the central highlands of Mexico. Sunrise claims a different view of Guanajuato. A palette of primary colors- terra-cotta abuts lapis azure, splashes of cobalt and lime vie for the eye of colonial architecture and small square houses that reside side-by-side.

Historically and architecturally, Guanajuato is like no other Mexican city. First colonized by the Spaniards, it became one of the three greatest silver mining centers, and the first region to declare its independence from the Spain in 1810,  giving birth to the Mexican Revolution. Today, the influence of Spanish and European architecture links the past and the present together.

There  are architectural jewels scattered throughout the city with the regal-Teatro Juárez– presiding over the grand plaza, Jardin Union. The neoclassical theater, studded with 12 stately columns, each crowned with bronze statues of Roman and Greek mythological figures, is revered as a cultural gem. The sumptuous interior draws sell out crowds for performances from theatrical, symphonic and dance. If you are a student, tickets are half price. It was here on a warm Saturday afternoon, I sat captivated as dancers and musicians from the University of Guanajuato  performed Mexico’s Baile Folklorico.

While there is plenty of action inside the Teatro, the tiered-stone steps of Teatro Juárez are a favorite spot for students, tourist, and families to plop down and enjoy the  abundance of music and street theater that fills the cavernous Jardin Union. The shaded  plaza is the epicenter of artistic activity, restaurants, patios,  and an array of mariachis. Distinct groups of mariachis appear to have an unspoken code of rotation throughout the evening so as not to create a cacophony, but rather a mellifluous conversation among the trumpets, guitars and violins. Life  moves outside on warm nights–families and friends dine together, lovers sidle up to each other, strangers strike up conversations and music and joy settle over the plaza. By day it’s a quiet place to sit under a canopy of  manicured laurel trees,  but once the sun goes down,  it’s a hub of  activity.

Across from the plaza roving musicians donned in velvet cloaks and ribbons congregate in front of  Templo de San Diego. A dominant fabric of Guanajuato’s festive nightlife, the musicians appear to be college students, yet, interspersed with the energetic youth are plenty of  a salt and pepper beards and a gaggle of stately looking  gentlemen. These are estudiantinas or Tuna de Oro’s who delight in singing and playing music as onlookers join in. It’s an old  Spanish tradition from Santander. In Guanajuato, the curious gather to  sing along, but for a few pesatas, there are nightly musical strolls with groups of estudiantinas leading the curious through the  city’s small streets and alleys. These nocturnal adventures are filled with  jokes, juicy historical tidbits, plenty of music and a little adventure, though all in Spanish. My group ended with an enactment of the legend of Callejón del Beso, or the kissing alley, a  Mexican Romeo and Juliet tragedy–two balconies, one rich Spaniard and one poor Mexican miner in love with  the rich Spaniard’s daughter. You know the ending…Today, tourists flock here to mount the stairs and kiss on the two tiny balconies.

On a recommendation, I chose to stay at El  Mesón de los Poetas, a  Spanish-style hotel in the  historic center of   Guanajuato and the perfect place to have contact with  a bilingual staff, all of whom have worked there for many years. An enormous breakfast is offered in the dining room, but I relished the hidden patios and courtyards within the hotel. All rooms are named after poets, a bonus for a writer. Once outside the hotel, to the left is  the birthplace of Diego Rivera, now a museum,  and to the right the University of Guanajuato. A half block and  down a small flight of stairs is the  Plaza de la Paz  facing the bright-mustard-colored domed Basilica de Nuestra Senora  Guanajuato. There are seven templos, and each has an historical legend. One such templo 18th century-Mexican Churrigueresque, Templo de San Cayetano, which is the size of a large cathedral,  and considered one of the most beautiful in Mexico with three carved alters. The Baroque construction coincided with the largest silver mine found in Mexico.

Historic Guanajuato is a walking city with an elaborate network of subterranean tunnels. The tunnels, initially built to divert flooding, ingeniously route the cars, leaving the small alleys and streets to the pedestrians.

It was on one of my many peripatetic sojourns I discovered Plaza San Fernando, an intimate plaza with  a smattering of al fresco eateries and a good place to relax over a late afternoons lunch or dinner or a drink. Though food isn’t expensive in Guanajuato, if you are on a very tight budget, pull up a seat at one on the numerous food stalls in the Mercado Hidalgo, and enjoy informal dining with the locals. The market was  designed with a combination of construction and archways of pink sandstone unique to the region,  and is the only market in Mexico of its kind. Built in 1910 as part of the celebration of Mexico’s centennial, the building has three entrances, 34 windows and a  3-story maze of shops, food stands trinkets and treasures. You’ll not walk out empty handed.

Cuisine is an integral part of life here. The best way to tempt your taste buds is  to stroll through the various plazas. My morning route began in Plaza Baratallio with its Florentine fountain. A magnet for juice lovers, there are choices galore from fresh  carrot, guava,  orange,  greens, grapefruit all priced at about a $1.00.  Next to the juicers, a constant flow of people crowd around a  cart of entrepreneurial señoras who pat dough into chubby tortillas, fill them with beans, meat, cheese and a chili sauce. Nearby, a daily truck unloads a bounty of fresh vegetables and herbs and, of course, a cart with fresh-baked rolls sells out by 11 a.m.  Two of my favorite discoveries for dinner were Truco  at 7 Truco-for enchilada suizas or traditional Mexican dishes, and a delightful French find, La Table De Andree at 99 Colonia San Javier for divine French dishes.

While I combed the streets and alleys for independent art galleries to peruse and ponder, several locals directed me to Calle de Manuel Doblado No. 1, where I spent a few hours in the Museo Iconográfico del Quijtote, with its interesting collection of paintings, murals and sculptures depicting Señor Don Quixote, the Man from La Mancha.  Guanajuato has a strong connection with Quixote, including a yearly Quixote festival.

It’s easy to take side day trips from Guanajuato and one of the more ghoulish, yet popular attractions is Museo de las Momias. Guanajuato’s unique geology created a natural mummification process, which led to the museum. If mummies frighten you,  visit one of the mines , El Nopal Mina (the Nopal Mine), which  is the closest mine to Guanajuato city center or popular bus tour to  Valenciana mines, also known as Minas San Cayetano.

Alas, for a  breathtaking view of Guanajuato, ride the funicular to the Pípila Monument. Perched  atop a hill,  the monument honors local independence heroes, and offers sweeping views of Guanajuato. Pípila, his large fist raised, is the first site I saw entering historic Guanajuato during the taxi from Leon airport, and the last as I bid good-bye to this beautiful city.

The closest airport is Leon, Mexico. Buy your taxi ticket inside the terminal for a ride of approximately 25-30 minutes, or take a bus to Guanajuato terminal and then a taxi to the historic center. If you fly to Guadalajara, buses run daily to Guanajuato.