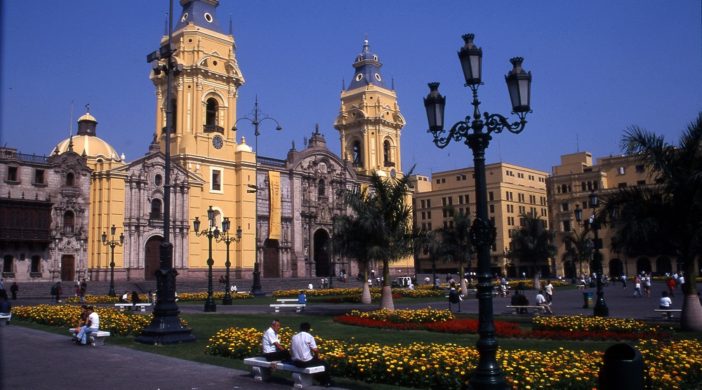 Ernest Hemingway came to the Peru Coast in 1956—partly to hunt black marlin, partly to oversee the filming of his monumental novel, The Old Man and the Sea. Sixty years after his visit, I, too, head to coastal Peru. None of my magazine articles have been optioned for Hollywood blockbusters.  Nor will I fish for black marlin—much as I’d like to.  But, make no mistake, I’m bound for adventure.

For several days, I’ll explore Peru’s Central Coast, where the Pacific Ocean crashes along miles of shoreline backed by dunes shadowed by snow-capped Andes. I’ll visit the 800,000–acre Paracas National Reserve—a UNESCO World Heritage Site, Peru’s sole marine preserve, and home of the Islas Ballestas, known as the “Baby Galapagos.” When the long dry day is done, I’ll cool off just as Hemingway would with an icy glass of pisco, Peru’s national drink and the specialty of Hacienda La Caravedo, oldest distillery in the Americas, home of premium Pisco Portón and the final stop on my Central Coast adventure.

Arriving in Lima, I check into contemporary-style Hotel Atton in Lima’s tony San Isidro district, then take a 15-minute taxi ride to the centro. Facing the Pacific, with the Andes along its back, the Peruvian capital is a bewitching, if somewhat faded, beauty. A sprawling pre-Incan settlement, then the Incan capital and later a viceroyalty of Spain, Lima intrigues with multiple layers of history and culture. You’ll find archeological sites called huacas, dating thousands of years before the Incans, as well as beautiful old Spanish Colonial churches like Convento Santo Domingo, with its flower-filled courtyard and multilevel bell tower, and Lima Cathedral, where the ornate marble tomb of Francisco Pizarro, the 16th-century Spaniard who conquered Peru, rises amid icons and altars dripping in gold and silver.

Sleek restaurants serve Peruvian fusion cuisine whose Italian, French, Spanish, Chinese and Japanese accents recall centuries of immigration to this South American crossroads. Here, too, are simple places where a hungry person can dig into a big plate of native criollo food like tacu-tacu, rice and black beans with a wafer-thin beef fillet topped with a fried egg. And, always, there’s a glass of pisco waiting somewhere in the English Bar of the white 1920s-era wedding cake known as the Country Club Hotel in the faded Gran Hotel Bolivar on Plaza San Martín in the downtown Bar Cordano, where you can taste any of 600 pisco brands as ceiling fans whir lazily overhead.

After two days in Lima, I hop aboard a rented American-made SUV for the 166-mile trip south to Paracas, a 3 to 4-hour drive down the South Pan–American Highway, or Carretera Panamericana Sur. On one side of the well-paved road, bright blue patches of coastal waters peek seductively through the trees. On the other, nearby dunes rise while the Andes loom in the distance.  Just after nightfall, I arrive at Hacienda Bahía Paracas, a sprawling resort with pelicans roosting on the bay, kayaks waiting on the beach, and spacious guest rooms with terra-cotta tiled floors and colorful Peruvian wall–hangings.

The hotel’s cozy Marineros Bar, with little wood tables, has a plaque marking Hemingway’s 1956 trip to the coast, albeit 900 miles north in Cabo Blanco. And sailing across one whitewashed wall is a five–foot black marlin with a foot–long bill. I’m impressed by its size and splendor, but, as black marlins go, it’s actually pretty small. In 1953, in Cabo Blanco, one Alfred C. Glassell, Jr. caught a monster black marlin that was almost 15 feet long and weighed 1,560 pounds, a world record that’s never been broken. Hemingway’s biggest marlin was only 900 pounds.

Just up the road, there’s a fancier Starwood resort, the Hotel Paracas. I dine there one evening, drinking in views of the lighted outdoor infinity pool surrounded by carefully arranged Bali beds under airy shelters. It’s a stunning setting. The excellent, but obsessively manicured, fusion cuisine—including six of Paracas’ famous scallops each topped with a different colored sauce or molecular froth—is delivered with well–orchestrated breaks between courses like pauses between movements at a classical–music performance.

This is the kind of place where I’d have to come to dinner every night wearing my best linen blouse, nicest slacks and finest Italian–leather loafers. I couldn’t just plop down into a chair on the terrace in the same dusty jeans, wide–brimmed adventurer’s hat and sandals I’d worn all day, order a plate of grilled red snapper, get served within minutes, eat as if wholly consumed by the plate in front of me, then fall right into bed. Which is why, on this particular trip, the Hotel Paracas is great for a fancy meal or two, but the Hacienda Bahía Paracas, a big airy country house with a laid–back vibe, is elegant enough for several overnights.

Up early, I breakfast on huevos rancheros, beans and o.j. on the Hacienda’s spacious terrace, steps from the swimming pool and the swim–up guest rooms. Then I stroll the property’s beach, curving along the clear turquoise basin of Paracas Bay. A 15–minute drive takes me to the Paracas harborfront, a low–slung strip of cafés, tour companies and souvenir stalls. Crowds are already queuing up on the beach for the motorboat ride to the Islas Ballestas. I hop a 12–seater and am soon speeding out to sea past squawking pelicans and colorful wooden fishing boats.

After a half–hour or so, the Islas Ballestas—the double “l” is pronounced like a “y”—swim into view. Though relatively close to the harbor, these craggy islets, skerries and rocks look like they’ve risen out of nowhere. Nearing their rocky shores, our boat pitches back and forth in the foaming chop, and I see why these isles are called the “Baby Galapagos.” Overhead wheel thousands of birds—cormorants, gulls, condors, diving petrels, turkey vultures and others—while boobies blue, gray-footed and Peruvian scramble over the rocks.

Sea lions, pods and pods of them, roil on the rocks, flirting with would-be mates and posing for our cameras. Two–foot–high Humboldt penguins, in black–and–white feathered suits, toddle around like miniature Charlie Chaplins. Peru, along with Chile, is one of the world’s few places where endangered Humboldt penguins are found. It’s also one of the few spots where you’ll find the Humboldt Current. Flowing from Chile’s southern tip to northern Peru, the Humboldt Current is the world’s most productive marine environment, its upswelling waters constantly churning up nutrients from the deep.

My cruise also offers excellent views of El Candelabro, a 600–foot–high geoglyph etched into the Paracas peninsula’s north face.  Some say it’s a candleholder, cactus or hallucinogenic jimson weed. Others, that it’s the trident of Incan sea god Viracocha, aka Kon-Tiki. Still others believe it’s a sign left behind by early mariners, by symbol-obsessed Freemasons, or by the crew of Argentinian general José de San Martín, who helped liberate Peru from the Spanish in 1821.

From the Paracas waterfront, several companies offer helicopter tours of Peru’s famous Nazca Lines, a couple of hours down the coast. Those 300 geoglyphs include stylized geometric shapes, exotic plants, and various animals, from hummingbirds and monkeys to spiders and sharks.

Realizing that I can just as easily have an adventure exploring a new food or drink as I can hacking my way through a steamy jungle or crawling up a snow–covered mountain, the next and last stop on my Central Coast adventure is the town of Ica, 45 miles inland from Paracas. There, I’ll journey into the heart of pisco, Peru’s national drink.

A 75–minute drive along dusty, winding roads brings me to the melon–colored stucco gates of Hacienda La Caravedo.  Established in 1684, the oldest distillery in the Americas has been owned for almost a decade by American investor Bill Kallop, his wife, Cristina, and their son, Brent, a Columbia MBA grad. The sprawling hacienda, with its Spanish-style archways, verandas and trio of stone fountains, has been completely restored, along with the old outdoor distillery, whose wooden press features a giant screw fashioned from a gnarled chunk of a native huarango tree. A new state–of–the–art distillery features gleaming copper and stainless-steel tanks.

If you’re lucky, charismatic Master Distiller Johnny Schuler will lead your tour.  Considered the world’s authority on pisco, Schuler has earned a Medal of Honor from the Peruvian Congress for his efforts to regulate and popularize pisco. On tour, you’ll learn how the clear grape–based liquor is made, and taste several varieties of the distillery’s Pisco Portón brand.  Spend a couple of hours inside the distillery, and outside, where the owners’ Peruvian Paso Fino horses can be seen ambling with their distinctive lateral gait across the grounds, a sea of vineyards beneath  snow–capped Andes.

Consider these hotels in Lima and Paracas:

Be sure to visit these Central Coast attractions: