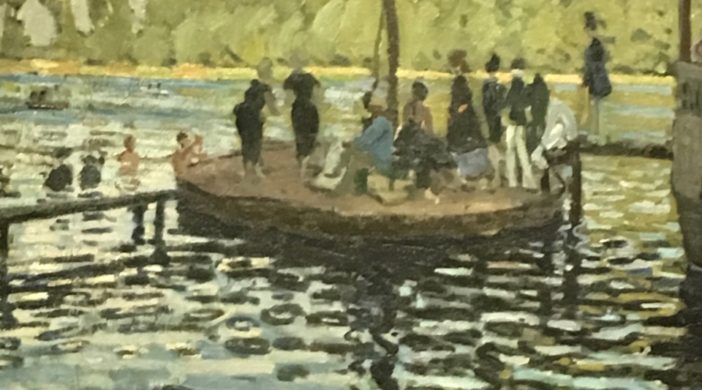 Photos and Story by Stephanie Levin.

On a chilly, wintery Parisian afternoon I descended the staircase in the Musée de l’Orangerie and discovered Monet’s Nymphéas. The enormous circular painting was bathed in a light so extraordinary that I sat transfixed for several hours in the grace of Monet’s Water Lilies.  The illusion of an endless landscape of water lilies, willow branches, clouds without beginning or end, the sheer size of the canvases, the play of color and light, left me speechless. I would return a dozen times that year, and like so many novice art lovers, Monet was my foray into Impressionist Art. Yet, not even my excursions to Giverny, Musée D’Orsay, nor my many afternoons keeping court with Nympheas prepared me for the current exhibit Monet: The Early Years, (1850-1870), February 25-May 29, 2017 at The Legion of Honor in San Francisco.

This is the first major exhibition in the United States devoted to Monet’s early years. Fifty paintings, culled from private collections and museums from around the globe, take viewers on a journey beginning with Monet’s first painting at age 17, View Near Rouelles. Each painting in the exhibit is a passage through the young artist’s life as he strove to define a style through his publicly exhibited canvases; his first successful salon followed by turbulent years of struggle, to  the culmination of Monet’s success in his early thirties. There are no water lilies in Monet’s early years, but you will be privy to themes from this period that he refined and that remained throughout his lifetime.

While the word impressionism did not exist as an art form in Monet’s early years, his combination of light, color and the infinity for landscape astonished everyone. The enormous painting at the entrance of the exhibit– Luncheon on the Grass- evokes a congenial, dreamy Sunday picnic in the countryside. Monet understood the way to gain recognition was to exhibit at the annual Salons where critics flocked, where artistic success or failure was determined. Monet’s ambition was to enter Luncheon on the Grass in the Salon. The ambitious painting originally measured more than 13×10 feet, and was too large to paint indoors. Here you see Monet’s command of the landscape that is a hallmark of so many of his paintings. Unfortunately, Monet could not finish this painting in time for the Salon, and struggling financially, he gave the painting to his landlord for collateral. Stored in a damp basement, the rolled-up painting mildewed, and viewers now stand in awe and admire the two canvases that remain of Luncheon on Grass. (1865-66)

In 1867, Monet’s mistress, Camille Doncieux, who would become his wife and his favorite subject, seen in many of these paintings, gave birth to their son Jean. In the paintings, The Cradle (1867) and Jean Monet Sleeping (1868), one feels Monet stroking the canvass with tenderness and simplicity, drawing the viewer into a more personal genre-domesticity.  A third painting in the series, The Red Kerchief (1869), is one of the most remarkable images of Monet’s early paintings.

The painting is of Camille, her ruby-colored cape and kerchief the center of the painting. The three paintings are influenced by rare hues of red from the slight rosy cheeks of his son, to the dotted red flower buds covering the cradle and the burst of scarlet in Camille’s cape.

Many of the paintings demonstrate Monet’s attention to unique formations, water in various seasons and conditions, complete cycles of natural life from winter snowstorms in Honfleur (1865), a buttery light reflecting off the snow to an abrupt shift in color and emotion depicted in the tempestuous cobalt jade sea in The Green Wave (1866). The juxtaposition of nature’s temperament in these paintings is a pleasing new discovery, as well as a tribute to Monet’s adept technique of marrying color to nature.

By 1870, avoiding the Franco-Prussian War and creditors, Monet moved his family first to London, then to Holland. His prolific four months in Holland reflect in the painting Houses by Zaan at Zaandam ((1871), its soft shades capture a feeling of well-being reflected through the deft combination of water, blue sky, green trees and pretty peach-colored waterfront houses. Water flows through the motif in many of Monet’s early paintings and three of my favorite paintings in the exhibit were paintings Monet could not sell at a time when his finances were dire.

They are abstract expressionist paintings; yet the reflections from the sky down to the right lower corner of the canvas lull the viewer into a reflective dream dominated by nature’s elements. The water appears to playfully undulate as the sky and water blend, again without beginning or end, into an aesthetic, natural relationship.  The first painting, On the Bank of the Seine, Bennecourt (1868) is a remarkable pictorial masterpiece with Camille on a river bank, trees and in the distance, the town across the river.

The second canvas, La Grenouillère, depicts a popular bathing resort, and Bathers at La Grenouillére captures bathers surrounded by beautiful water and trees. Sitting with these painting in the gallery felt intimate, inviting; a symphony of light; a reflection of genius.

In 1866 Monet painted a bucolic scene, perhaps a harbinger to his later years in Giverny and his fondness for horticulture, Adolphe Monet Reading in a Garden.  Adolphe, Monet’s father, leans against a bank, dressed in a suit and straw hat, reading in the shade of a rose garden, the garden path dabbled in shaded light filtering through the arched trees.

The exhibit closes with paintings from the early 1870s and is quintessentially Monet-impressionism.  The final painting in the exhibit, Argenteuil (1872), is the perfect painting to reflect on, not only because it terminates the period of Monet’s early years, but Argenteuil was then a picturesque commune near Paris where Monet moved with his family, and  his first residence where he lived free from financial strain and worry. By 1872, Monet had established himself in the art world, a success that would last his lifetime. One walks away from the exhibit with a deep sense of joy, a cherished window into Monet’s early paintings. Just as the public is amazed at Monet’s staggering number of perfect paintings, back in 1860s fellow painters and salons were too amazed at Monet’s virtuosity. Esther Bell, the curator of European Paintings at the Fine Arts Museum, San Francisco, sums up Monet’s early paintings best: “He is a master of light and texture, in his depictions of large and small moments, with friends and loved ones, in the solitude of forests and fields and in the quiet scenes of everyday life. Every stroke commands our attention.”

For more information on Monet and the exhibit go to www.famsf.org  and for a preview read the digital story of Monet Early Years on the site at: digitalstories.famsf.org/early-monet.