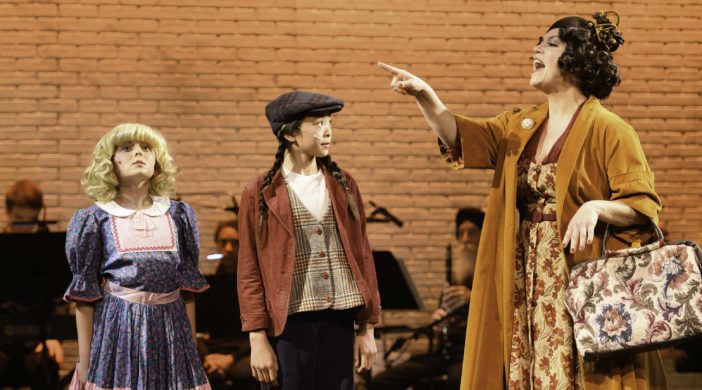 (Review by Carol Canter) “Curtains up, light the lights, you got nothing to hit but the heights!” Well, everything did come up roses opening night for Bay Area Musicals’ fabulous production of Gypsy, which director and choreographer Mathew McCoy calls “the ultimate showbiz fable.” And that it is — a fable bursting with all the glitz and glitter, hilarious humor and heart-wrenching pathos of the ultimate show biz mother, Rose Hovick, as she pushes her two daughters — hard, very hard — to live out her own dreams. This 1959 fable of the last days of vaudeville is based loosely on the 1957 memoirs of Louise, the overlooked daughter who seizes the spotlight as Gypsy Rose Lee, the famous striptease artist.

An excellent creative team and cast bring to the stage of the Alcazar Theater the 6- time Tony Award-winning musical with unforgettable music by Jules Styne, lyrics by Stephen Sondheim and book by Arthur Laurents. Songs like “Let Me Entertain You,” “Together (Wherever We Go)”, “Small World,” and of course, “Everything’s Coming Up Roses” still resonate, especially when belted out by some of the notable actors. The lovely Jade Shoajaee rises from the awkward young Louise to the elegant stripper with perfect pizzazz, while Ariela Morgenstern plays Mamma Rose with all the gutsy, charming, loving, selfish and cringe-worthy craziness of a complex character easy to admire and despise. In fact, she belted out her final statement, “Rose’s Turn,” with complete command. She was an emotional powerhouse strutting, singing and dancing across the stage. No wonder the crowd rose in a standing ovation — this was a big night for small theater in San Francisco. It runs through December 8. Don’t miss it.

(Review by Lee Daley) Coming out of the Alcazar Theater after the performance, the lyrics and musical score of GYPSY resonated repeatedly in my head. It was a heady performance. Drama, humor, anguish and victory all play their part in this roller-coaster ride through the metamorphosis of meek little Louise’s transformation into the legendary striptease artist Gypsy Rose Lee. The musical score with lyrics by Stephen Sondheim brings the performances alive as the characters, especially Rose, embody the lyrics.

The play is based on the 1957 memoirs of Gypsy Rose Lee and focuses largely on her mother, Rose, the embodiment, of the “ultimate stage mother.” Because much of the plot rests on the central casting of Mama Rose, each actress who has taken on the challenge has brought something very different to the show.

(review continued)  In previous performances, Ethel Merman belted out Rose’s bravado brilliantly. Bernadette Peters gave Rose a more nuanced touch. I’m here to say Ariela Morgenstern holds that torch high. Her rendition of “Rose’s Turn” in the finale crowned an outstanding performance, not only by her, but by a cast that has created another rollicking rendition of this great musical.

The ten member orchestra was noteworthy. Jumping back and forth from  conducting to keyboard, Jon Gallo’s talented team belted it out and never missed a beat. With just bass, keyboard, guitar, wind instruments, sax and trumpet, their performance was amazing, especially that by the bearded and turbaned clarinetist who also picked up and switched, mid-phrase, to piccolo, flute and saxophone. Resident Musical Director Jon Gallo has arranged the luscious musical score so memorable to music lovers and theater goers ever since its first opening on Broadway in 1959. To quote Director Matthew McCoy, “GYPSY is one of the very best-perhaps THE best- book musicals in the American musical theater canon.” The musical has been nominated for eight Tony Awards. Theater critic Clive Barnes wrote that “Gypsy is one of the best of musicals…” and described Mama Rose as “one of the few truly complex characters in the American musical.”

During intermission I had a chance to enjoy the eclectic artwork on display in the theater’s lounge area.  Sculptures and paintings recreated the personas of show biz personalities as diverse as Janis Joplin and Rita Hayworth. Updated, light and bright, the space creates an ambience that’s entertaining and energizing. All in all, the evening at the Alcazar Theater fulfilled, for me, the promise of one of Gypsy’s theme songs, “Let me Entertain You.”  To paraphrase its closing line, “We had a very good time.”

Bay Area Musicals (BAM!) is a professional, non-profit theater organization dedicated to presenting the highest caliber of musical theater in San Francisco. Founded in 2014, the Company strives to stimulate and inspire the San Francisco Bay Area community through musical theater ranging from familiar classics to challenging new works; to produce professional musical theater at accessible ticket rates; and to engage the community through performance, outreach, and educational opportunities. For more information, visit www.bamsf.org.